Uh oh. Blogging is weak in me! But I am still working on my game, which I mentioned several times before under this tag (and several other tags as well, as my RPG-related settings and projects intermingled and devoured themselves over and over). But even the name of the game was changed.

Yup, that's a saying from the game's world - Pain is name of the city. The only city that survived the Fall (click but bear in mind that this info be quite outdated). And as you can see on the map above - there's quite a lot of things happening under it. So - maybe you should expect some solid underworld-crawling.

Next thing - there will be only one playable race - the Unliving Ones. Humans are now extinct and only the "amalgamations of biological flesh and arcane technology" remain. More info soon (ha, fucking ha... expect to read about them in the next 4d6 months).

Also - game will most likely use my percentile mechanics, a derivative of an engine used in Perilous Ages. But it will be even more streamlined and gritty. Why the d% engine, instead of more standard OSRish approach? There are two main reasons. First - I dislike asymmetrical combat (passive defense and binja armor paradox - the more heavy armor you have, the smaller the chance to hit you is). Second - percentile mechanics are really, REALLY easy to convert them to any other existing ruleset. And they are extremely easy to hack / modify. At least IMO.

However - this time things will be soo fucking different from my previous releases...

Let's be honest - I fell in love with MÖRK BORG. Absolutely, both in terms of aesthetics and content. What is even more interesting (at least from my point of view), I planned to do something similar two years ago - but still had no clue how to start (or finish). Artpunky rulebook is a way for me to go. And - as I already have like ~70 A4-sized pages full of text (not counting the rules) - it will be quite big.

I will try to update the blog with some Pain-related news. Also, check out my Instagram profile and add me on MeWe.

Email ThisBlogThis!Share to TwitterShare to FacebookShare to Pinterest
Labels: design, info, maps, whY


Today I created an IG account for my geeky activities, mostly the ones connected to all my blogging/RPG-related stuff. Of course, I will still try to update this blog - but as you can see, I'm not very good at it nowadays.

On the topic of Pain RPG / whY - I'm still making progress with the game. Once I create something more coherent, I will post it here.
by Albert R. at 10:43 AM No comments:

As you can see, I'm still kicking. Not very active on the RPG-side of my numerous hobbies - was mainly focused on drawing, painting and music. But from time to time i work on the Pain project, adding new stuff - but mostly reworking the old ideas.

For example - yesterday I made a small, very basic version of the cross-section of the City of Pain, which you may gaze upon. Right here, right now I'm working on the much bigger and much more detailed one. Most likely will post some progress photos on my MeWe profile. 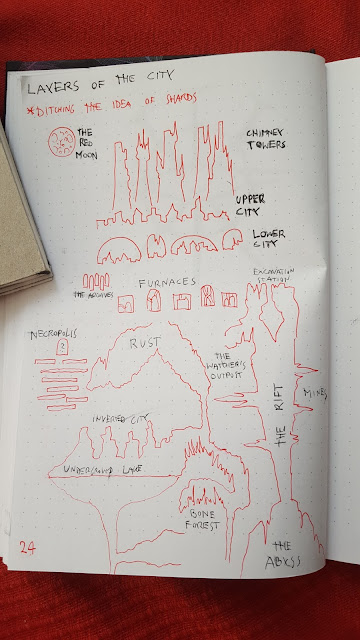