Pain - glimpse of the game mechanics 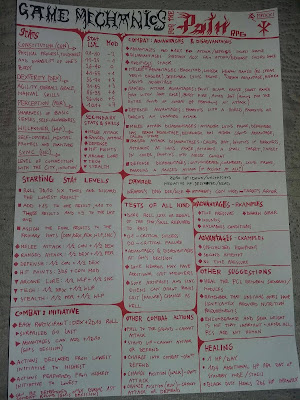 Yup, entire ruleset on one page. Of course I expanded it in the Pain manuscript, which by the way is now over 110 pages long. Still, even though I slowly see the end on the horizon, it's still relatively far away.

And then I must make the artwork :) 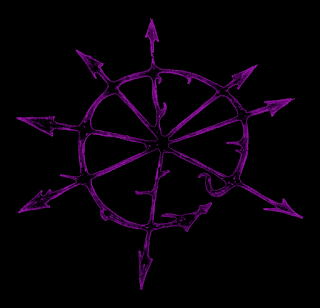 For the last two days we were working hard to figure out what Character Classes we want to include in the game. So, after almost boiling our brains due to the overheat, we came up with the following list. They both fit the game world perfectly and also are full of its dark atmosphere.

I think it's a pretty good post for the 700th blog entry!

DOOMED SENTRY [I've seem too much on the surface, time to delve down]

ENLIGHTENED PILGRIM [in a search of Wisdom of the Depths]

INSPIRED ARTISAN [and inspiration lies deep under the City of Pain]

LUCID DREAMER [they need my ability to dream]

MASTERLESS GUARDIAN [looking for a purpose, down there]

REPENTANT SINNER [salvation thru service for the Seekers]

RESTLESS CHRONICLER [someone have to write it down]

ROGUE TINKERER [in a search for the Artifacts]

VERMIN SPY [servant of the deity known as the Chaos Rat]