Accursed domains hidden in the realm.

Hello, this is mr.wight again.
There are places in the world that lead all to damnation with no recognition of their past deeds.
One of such places is the Lost Haven. A cursed, god forsaken city that used to be a shining jewel amidst the darkness of the Underworld Kingdoms caves. Many ships made port there and it is said that the wealth accumulated there could fund many, many wars or even entire kingdoms. Some even say that certain items infused with the power of magic were available to the highest bidder in the auction chambers of the upper classes. Albeit the city was powerful and posed both a threat and an invaluable asset for everyone that that was strong enough to be noticed by its rulers it was not mortals that eventually led to its doom. Forces much more terrifying and vicious are said to have cursed the realm of the city and sealed a pact with a great beast of the underworld to dispose of all that would dare to loot its treasures. At some point the beast started luring vessels sailing nearby with powerful magicks of illusion and treachery as the races inhabiting this world were less then keen on getting their hands on the treasures of the City leaving its memory to become one of many myths that live in the darkness of the caves.
There is a forest in the Kingdom. The Cursed forest of T’tog with its mighty trees that shine with an unnatural light. Their leaves gleam with a pale green glow that give little light to the surroundings thus allowing many animals and monsters to live there and survive in one way or another. A tribe of men lives in the forest and cuts trees for those that are willing to pay. The problem with being a lumberjack in T’tog is that you can never leave once you cut down a single tree. When a tree dies it sheds its juices in a manner a burst artery would. It’s a powerful poison that may bring one to life at the same time imprisoning that being to the boundaries of the glowing trees. It won’t die. Neither the crushing weights of the trees or the fangs of predators will end life of one of the lumberjacks.It is said that their wounds heal, though in a very painfull way. That every death does leave a terrible scar upon their bodies.Some say that ancient beings live there. Beings that possess knowledge of the power that is hidden away somewhere among the dark caves.
Hope you people enjoy it. Pleas comment as I am very curious about your thoughts on my writing.
by mr. wight at 4:05 PM No comments:

Tribes of the Megastructure

Examples of the savage tribes that occupies the Megastructure:
Followers of the Core – band living in the complex of endless corridors in the northern part of the Megastructure. They worship as god one of the AIs, named Core 217. Some rumors says that Followers capture travelers and members of other tribes and sacrifice them to their god. Some other people says that numerous clan elders were “possessed” by the Core and now bear strange and sinister powers.
Rebuilders – nomadic clan that believes that Builders are servants of evil gods, sent to the Megastructure to prepare it for the arrival of the Seven Dark Lords. Tribe members follows Builders in their endless journey through the Megastructure and “seal” their creations by mystical sigils, totems and paintings. In some cases they just destroys new rooms, corridors or installations, freshly created by Builders. Tribe is at constant war with Black Crab Children.
Warriors of the Steel Caverns – once proud and strong tribe, now decimated by Ho-ru expedition. Some of their elders (or even tribal chiefs) may be descendants of the long-gone masters of the Megastructure, as they know the secrets of the old machinery, teleporters and hidden passages. Some of them carry strange and very powerful weapons of unknown origin. Some believes that that tribe is degenerated descendants of expedition of off-worlders.
Black Crab Children – tribe that worships one of the biggest (and most insane) Builders of the Megastructure – the dreadful Black Crab. They are cannibalistic savages, hunting mercilessly every other living being. Some of them are augmented by its god’s creations – electric circuitry, hydraulic muscle replacements or armor plates. Those “gifted” by a Black Crab are treated with respect and fear by other members of the Tribe, mostly because of their power, agility, ability to kill and utter madness.
Brotherhood of Yarrrhh’l – they are more a band of retarded and mutated clones than a typical tribe, but they generally fits in this category because they are one of the most primitive occupants of the Megastructure. With a twisted bodies and almost “blank” minds they wander through the Megastructure, sometimes attacking everything on their way, sometimes fleeing before even smallest group of adventurers. Most of them are unable even to speak, but some believes that they all are mind-linked and can communicate with each other Brother with some kind of ESP. Its rumored that they are all just drones of their ‘mother” or “breeding facility”.
by Albert R. at 5:55 PM No comments:

LINK, and some examples: 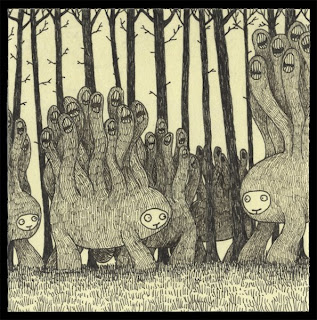 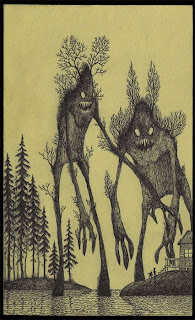 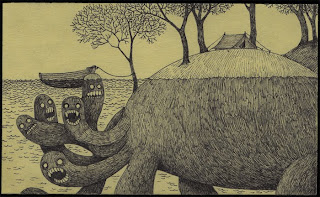 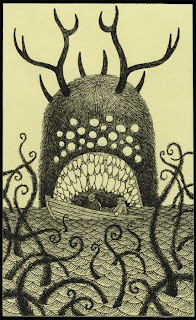 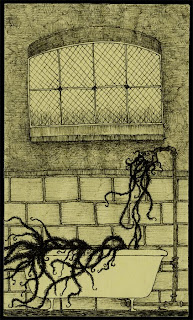 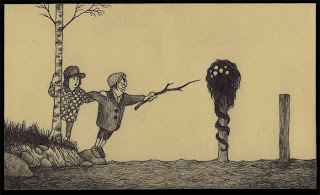 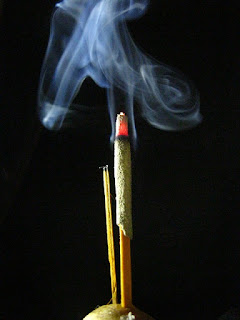 1 – red – anybody inhaling the smoke must save vs. Poison or go berserk, attacking everybody in his line of sight. Effect lasts as long as incense is burning.
2 – yellow – emits horrible odor of rotting eggs. It smoke can reveal invisible objects and hidden doorways.
3 – black – stinks of rotten fish. Inhaling the odor for one full round (10 minutes) heals 1 lost HD.
4 – cyan – sweet scent. Save vs Magic or fall asleep for 1d10x6 minutes.
5 – purple – sweet and very intense scent. May attract and lure monsters. Eating the incense may cause regain or lose 1d6 HP (1d6: 1-3 gain, 4-6 lose).
6 – gray – smells like old dust (1% for allergic reaction). Save vs Magic or forget one spell (or one important name for non magic using characters).
7 – gold – emits black, dense and odorless smoke. Every piece of gold (including gps) incensed by this smoke simply disappears. Sweet, eh?
8 – green – emits disgusting reek of rotten flesh. Any undead that can “smell” the odor (even if it has no nose) will automatically flee.
9 – white – flower scent. Inhaling its smoke may cause visions, oracular mumblings or similar effects (up to GM’s decision – may be fragments of map, knowledge about secret passages, monsters etc.) the only drawback is that scent of this incense will lure every insect (including giant ones) to the aroma.
10 – multi-colored. Roll twice!
by Albert R. at 9:23 AM No comments:

Haven't seen it yet, but seems to be very inspirational.