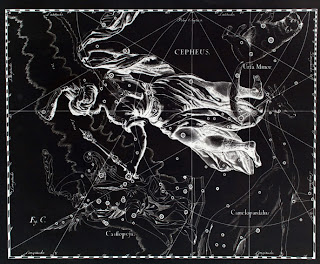 Alpha Cephei (α Cep, α Cephei) is a second magnitude star in the constellation of Cepheus that is relatively close to Earth at only 49 light years. It has the traditional name Alderamin, an Arabic name meaning "the right arm".
Alderamin is a subgiant or a dwarf of spectral type A7 IV-V, its absolute magnitude is 1.58 m. The mass of the star is about 1.9 times the mass of the Sun, while the diameter is 3.5 million kilometers. This star has a surface temperature up to 7600K, its luminosity is 18 times larger than the sun.
Around the year 7500, due to the precession Alderamin  will take place the North Star on the celestial sphere.
(from Wikipedia)
Alderamin is a sun of Ortix. Inhabitants of the planet call it the Cold Star. Tts name come from the fact that it is much farther from the planet than our sun. Although it warms Ortix as much as the Sun warms the Earth, but it's visible only as a small point in the sky. Its light is pale and cold.
by Albert R. at 11:13 AM

Email ThisBlogThis!Share to TwitterShare to FacebookShare to Pinterest
Labels: geography