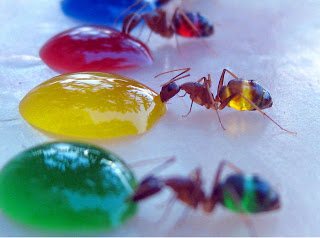 During the history of this blog, I've posted several random tables containing random objects of different colors (dusts, incense, even giant slugs!). When I was working on the magical dusts entry, my girlfriend (who is also a gamer) asked me "why don't you make two random columns, one containing color and one with the effects?"

Answer to this question is really simple - of course I can make all "colors effects" random, which should make using all stuff without identification more challenging but I decided to allow players (not the PCs) to learn about the world. They should (but we all know that it's not certain!) learn that - in example - black potion should be the potion of invisibility, and the red dust may haste its user (but not always - note the tone differences). I think that's the important part of the campaign world / worlds - to let players to learn about the properties of some more or less mystical / unusual things by themselves, without using abstract things like the identify spells and similar bullshit (which is sometimes good, but - in my opinion - only sometimes).

Funny thing is that all colors have different effects on different substances (compare tables containing dusts and incense, for instance) so this may lead to some serious (sometimes even lethal) mistakes. But well, no one ever said that the red potion will have similar effect to the red dust / incense / wand / whatever!
by Albert R. at 7:19 AM