When I started this blog (switching from the Terminal Space, back in the Golden Age of Blogging, damn I really miss those times), I did it mainly for posting stuff about my upcoming weird Sword&Planet / Science Fantasy / Gonzo Fantasy campaign setting that was slowly taking shape in my head. I was heavily inspired by Planet Algol (Blair, you need to come back) and my head was literally bursting with ideas.

And then over eleven years have passed.

Not much was done, at least not on topic of Ortix. Sure many ideas were written down but I cannibalized lots of them for the other projects. But the core remained intact and the last attempt to shape it into something more coherent was in 2019. And now I decided it may be a good moment to finally get it done.

Do not expect the end result within the next decade tho - since it started in 1997, it should take me next 25 years to complete it! More seriously - I don't even aim to complete the "Book of Ortix" or whatever it should be named. I treat it more as a thought experiment and way to keep myself occupied in the most creative way possible, while having fun at the same time. Of course I will post (or at least try to) the things I make, here on the blog.

So far I've compiled the loose list of one hundred ideas, both new and really old, that could be incorporated into the setting. Some of them are rather down to earth, while others (like four inner spheres of the planet) are outrageously gonzo. We shall see what will emerge from that mess. 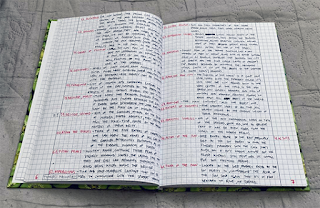 With the Ashen Void I've experimented with full-color AI art and rather clear and "semi-pro" layout. This time I'll come back to the roots - World of Ortix will be ugly, convoluted and linguistically inferior, sprinkled with strange, hand drawn artwork.

But - as I said before - do not expect any coherent releases on this topic within the next twenty five years.