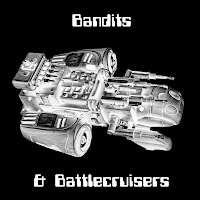 Over a year has passed since I mentioned about this idea for a first time. Since that day, an idea evolved and changed, from campagin setting (now called Battlestation Omega) to separate rules system, based on (obviously) Bandits & Basilisks and Terminal Space. Game will be an obvious mix of these two products, but I plan to expand it with some additional stuff:
I think that game will have about 50-70 A5-sized pages.
by Albert R. at 10:25 AM