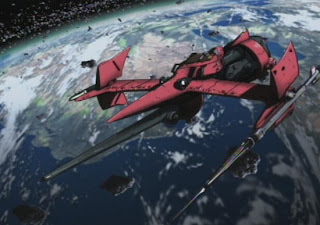 Sensors are sounding alarm - something is going to collide with PCs ship. Scanning reveals that it's small but very advanced fighter. It's strange but everything seems that it want to ram players' spaceship!

Roll d6 to determine why this situation occured:
Fighter stats for Terminal Space and Bandits & Battlecruisers: