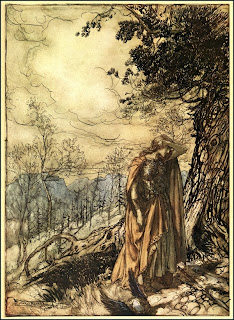 Good news - I have access to some computers here (two or three of them actually :D) but still have no direct access to mt rpg-related files. And I must admit that I like it - now I may focus on writing stuff for one of my weirdest projects.

I started my RPG career in 1997 when I was 13. Almost immediately I began to write my own rules system, mostly because I feel an urge to participate in co-creating of everything I'm in (mostly rpgs and music). Funny thing - yesterday I unearthed the notebook with that game, created between 1997 and 1999. Not surprisingly - it was rubbish. Clunky and extremely unclear rules wrote in some strange language, vaguely resembling Polish. But still, even after so many years, some basic ideas of that game are very appealing for me.

In february 2012 I decided to start writing some simulacrum game, not based on ideas of The First Game. Almost immediately I thought about my Legends of Rangor (that was the name of my very first game) but not about that rules per se, but - as I mentioned above - some basic ideas of it.

Okay, maybe I'll write something about them.

As you can see, not-very-cool ideas. But I was really satisfied by it. Generally, it was a mix of loose ideas from really basic DnD-style stuff (as my first contact with D&D was in early 2000s - no shit! - I think that they were ripped from the instruction booklet for... Eye of the Beholder III!) and MERP. BTW, I grabbed MERP rulebook several days ago (unfortunately I'm not the owner of it) and shit! Liz Danforth - thank you for all those awesome images - they were really important part of my childhood!

Damn, I'm drowning in chaos! So let me return to the topic. In that time, most of homemade systems made by my friends were strangely distorted variations about WFRP rules. And that was the reason why I was so proud of mine! It was ORIGINAL! :D

Sooo, when I decided to create my non-DnD simulacra, I was thinking alot about my newest creations (both OSR-related, such as Underworld Kingdom and Bandits & Battlecruisers and non-oldschool) and that old, shitty Rangor stuff. Effects of that thinking, plus of course some basic research on overcomplicated RPGs from the eighties, are:

Probably you'll ask me - why? Why are you wasting your time on this game? Eighties are over, man, no one wants that kind of games! Focus on your regular stuff! Your regular stuff is good so keep it alive!

The answer is simple - I'm making this game because I may and because I can. I'm making it for myself and maybe for my players. But I'm not sure if I want to run it! It's like making art for sake of making art :D I want to do it, I feel an unstoppable need to create it, so I'm doing it. If no one will be interested in it - it's okay. But if you want, I may post something more about it in the future. In the future, not now, because I must actually write more stuff - right now there is almost nothing to talk about! :D

(if I made some gross grammar/spelling mistakes in this text, please forgive me - it's 1 AM here and I'm rather sleepy)
by Albert R. at 6:04 PM