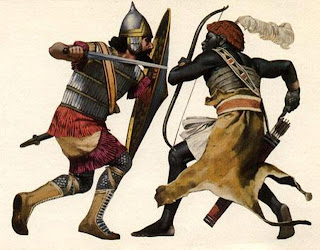 Two days ago I wrote a post about some old and some new ideas about 80s-style rules system. I'm still working on basic features of the game.
Rules system is not the only "problem" that I have with this project. During last fifteen years I created lots of stuff about cities, cults, races, monsters and so on. It's inevitable that many of these thingies were later almost forgotten. So, I decided to exhume at least some of them and try to form some kind of setting. Despite the fact that I have some old ideas about the "virgin", never played game world (or even many worlds) I want to make it different. Not especially different from "everything that was created in RPGs during past four decades" - it will be just plain stupid (and one Synibarr is enough :D) but rather different from my other projects / worlds. Let me explain this - most of my fantasy worlds were pulpy and made similar to Frankenstein's monster - stitched from loose ideas, not necessarily compatible ones. But no one cared - it was fun! This time I want to make it logical. And - more importantly - not necessarily based on typical European fantasy canon. It will be problem because I'm not an anthopologist (luckily my girlfriend is studying cultural studies) but more challenge=more fun.

At the moment I can't tell you almost anything about the setting as I started to sort the material about ten hours ago and slept during about nine of them :D
by Albert R. at 6:00 AM