Idea about the Moons

Rather extreme idea about the moons and the Megastructure. Cool but i don't know if i will use it - maybe it will appear only in rumours and legends.
Click on the image to enlarge it. Picture from Tsutomu Nihei's NOiSE. 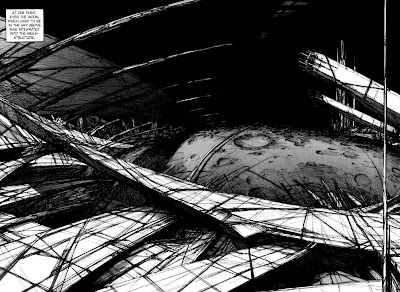 Since then 9000 years have passed.
Heavymetal based construction fluid is being brought in over various transportation lines.
A group of builders.
At one point, even the Moon, which used to be in the sky above, was integrated into the Megastructure.
In the end i didn't make it in time...
...because the Order brought tremendous suffering over the people through the chaos. Their appearance changed because of that.
They still continue their parasitic existence in the Megastructure.
Clawsa died 200 years ago.
Furthermore, I haven't met a human being in the last 100 years.
The netsphere is still expanding.
by Albert R. at 3:23 PM