As i mentioned yesterday on G+, my printer died, but I felt very strong urge to create a map for my campaign. I've discovered some old Aerotech map with one blank side with hexgrid only, but had to draw whole grid by myself as I did not want to destroy original map. Effect of my work can be viewed below - it looks like shit but I like it - for me it's much better than any digitally-created map :) 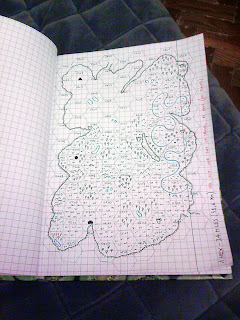 One hex is approximately 24 miles / one day of travel by foot (at least on plains). Northern parts of map were intentionally left blank, so I may add new things in the future.
I hope that this map will be included in Underworld Kingdom PDF, although it will not be the only one map of Underworld Wilderness :-)
by Albert R. at 12:38 PM