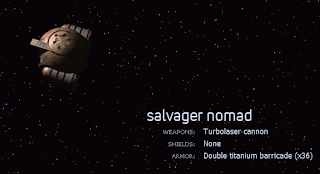 Space nomads travel the interstellar void on large, bulky ships, often being conglomerate of smaller vessels merged into one. Their communities are almost self-sufficient, with hydroponic plantations and livestock wandering onboard. Spare parts and resources are often excavated from forgotten or abandoned stations and mines or salvaged from wrecks. Nomad communities can vary - some are loose, almost democratic communes while other are family-based clans with very complicated laws and traditions.