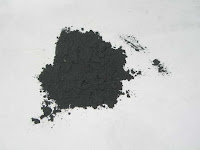 Black Dust is a common name for a strange substance that sometimes may be found in the ruins, machines and even artifacts left by the Hollow Ones. In most cases it has brown to black color and strong, choking odor of rust and chemicals.

Humans can use Black Dust for several things, but probably all of them are wrong and Hollow Ones had much better methods of using it.