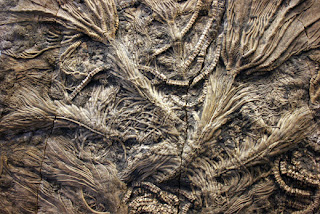 Strange and apparently biological growths that plagued northern areas of the Unnamed World. It resembles twisted and concrescent crustacean limbs and bodies, although they show only faint signs of life and are absolutely immobile. What is even stranger - although plague seems to cover larger and larger areas of the north, no one ever seen it moving or growing.

Although the effects of the plague are almost marginal, crustacean cover has one very dangerous feature - from time to time it breeds huge, nightmarish monsters called the Shrieking Reapers.
by Albert R. at 6:54 AM