You CAN do it!

A little photostory about yesterday CoC game session. First - some rubbish generated during the game:

And some mysterious can people caught by our photographer:


First: Szal, a man who was inspiration for the Cockroach King. Character: Henry Nowak, former archeologist who have seen too much. Participant of many shootouts, now working in tabloid newspaper called Sensation and Mystery:
Second: Piotr, current Terminal Space translator and proofreader for B&B. His head is not compatible with a can. Character: Mysterio the Magnificent, performer and prestidigitator, he claims that he came from Providence, but in fact he is a redneck descendant from Ohio's hellhole named Pigwash. Relatively fresh (and sane) PC. 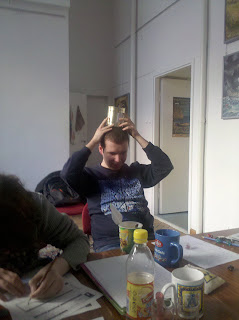 Next is Gogles the Potato-faced. His forhead was created to bear this can. PC: Doctor Faller, once world-renowned doctor and medical consultant, now deranged drunk and vagabond. Currently the oldest PC that is still active (however, his schizophrenia can be really nasty complication :D). 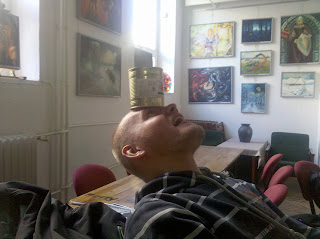 And finally, myself! My pointy head was unable to carry the burden of a can, so I was forced to hold it. Character: many cultists, Mi-go, one gug, one star vampire, one dark young, three sorcerers and one yithian - the vicious GM! 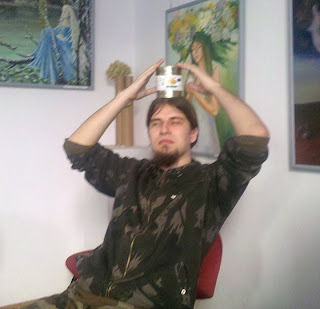 Note: three other players (including two ladies) and the photographer were not stupid enough to put the can on their heads. Too bad for them as they weren't immortalized on this blog!
by Albert R. at 7:07 PM