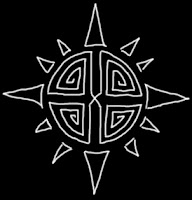 Former masters of magic, the Alarri civilisation collapsed when they were cursed by the Dargs' god. Apparently they were brought to life by the very essence of magic, source of which was in the center of their kingdom. Alarri didn't worship any gods, furthermore - because of their highly developed magical talents they saw themselves as equal to the gods (even though they represented only a fraction of K'reen or Shapers' capacity). It is said that this arrogance led to the conflict between Alarri and Dargs - children and followers of the Crystal God.
Although the technology of Dargs was very powerful and led to the destruction of large areas of the eastern forests, it cannot be compared to the magical powers of Alarri. Dargs' Kingdom has been broken and devastated, and the survivors fled into the underworld. However, this victory turned into a total disaster - The Jewel of Creation decided to avenge its children.
Crystal God broke through the magic shields guarding the capital of the Alarri kingdom. Although its crystalline "body" was destroyed, when Alarri tried to repel the attack, the dying god freed his life energy, destroying the power source and cursing all Alarri, severing them from their ancient magic.
Since the war Alarri number have decreased significantly. The old masters of magic completely isolated themselves from the world - a magical shield still keeps them out of the deserted and decaying kingdom, preventing access to anyone who is not invited. Now their power is only a shadow of their former abilities - even human wizards of Blackcrag would be able to overcome current Alarri masters.

Because of significant changes in current shape of the campaign, consider this info as the "old stuff" - it will be heavily modified.
by Albert R. at 8:38 AM