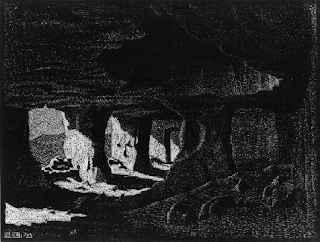 As the Ortix is completely tectonically inactive (this causes the absence of earthquakes an on the whole surface of the planet there is only one active volcano; moreover - it was artificially created), its interior is full of huge cave complexes. One of them is the Underworld Kingdom - an indefinitly vast network of underground caves, so large that traveling through them takes days if not weeks. In some of these caves, often covered with phosphorescent mushrooms and other strange strange vegetation, one can find old and new traces of humans existence (and other races, such as goblins and Ho-Ru the Black Lizardmen). Moreover - inhabited settlements can also be found there.

I called these places simply the "underworld wilderness". They will be mapped on standard wilderness hexagonal maps and travel through them is no different from the surface travels (except the fact that most of the underworld is much more dangerous than even the worst areas beneath the light of the Cold Star). In addition to the great caves, the underworld is dotted with smaller caves and tunnels sometimes connected into a real labirynthe of structures.

Of course, in addition to the great caves, the underworld is dotted with smaller caves and tunnels, sometimes connected into a real labyrinthine structures. this type of space can be regarded asa typical dungeon and their maps - mainly due to an entirely diffrenet scale - will be classic dungeon maps.

Sample (most important) areas of the Underworld Wilderness:
by Albert R. at 7:43 AM