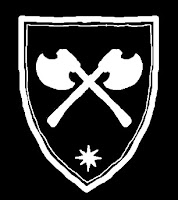 A dying race of short humanoids, created in ancient times by the ancient god of Ortix's mountain roots, known as the Jewel of Creation. Deity, whose domain was grievously wounded during the wars of Old Ones, cast its essence in the crystal to avoid destruction. Dargs, guards and followers of Gem, were created from stone and life essence of troglodytes, wild tribes that inhabited the limitless plains of the planet.
Many years later, just when first humans appeared on Ortix, blooming kingdoms of Dargs began a war with the Alarri - race inhabiting the vast, virgin forests stretching eastward from the Plains. Technology of Dargs could not match magic of Alarri, so their kingdoms were smashed, temples destroyed, and they themselves forced to fall back into the underworld, like the Shapers millenia before.Legends say that the direct cause of the wars and, and the coming of the inevtable death of the two races was a result of the Darg's god's wrath. The diety, who was mortally wounded during a magical storm unleashed by the magi-kings of Alarri - used his last reserve of energy to curse the winners of war in a single magical eruption.  Unfortunately, the consequences of that act also reached the children of the Crystal God.
Dargs are a race close to extinction - death of the Jewel of Creation deprived them of their will to live. Through centuries, their outstanding achievements in engineering and construction turned into dust, and their desire to develop knowledge changed into a meaningless vegetation. Currently, only a few Dargs leaves Calthiboros - their last stronghold, hidden deep in the bowels of the Underworld Kingdom.

Because of significant changes in current shape of the campaign, consider this info as the "old stuff" - it will be heavily modified.
by Albert R. at 2:43 PM