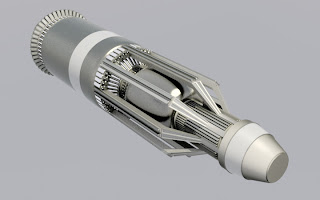 Powerful weapon for use in your Terminal Space or Bandits and Battlecruisers game.

Devastator Torpedoes are immense missiles, capable of destroying almost any target with a single hit. Their launchers are so big that they must be installed on Dreadnoughts or battle stations.

Devastator Torpedoes are equipped with own targetting systems (+10% to Weapon Systems skill) and have effective range of 25000 kilometers. High velocity of the missile causes serious problems with dodging it (-20%). Each torpedo has 20 points of carbide armor. Its fusion warhead deals 2d10x10 damage to a starship or space station and can be reprogrammed for "tremor blast", which deals only d6x10 damage to a starship or space station, but bunkers, cities or other rock/concrete installations receive 2d20x10 damage. After shooting a torpedo, reloading the launch tube requires three rounds of space combat (30 minutes).

Email ThisBlogThis!Share to TwitterShare to FacebookShare to Pinterest
Labels: A to Z, Bandits and Battlecruisers, spaceships, starship weapons, Terminal Space