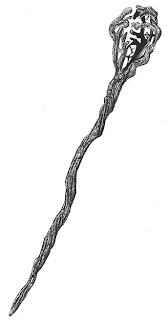 Six inches-long staff, made of white wood. If used in combat, it deals +1 ice damage. Also, it has 7 charges that can be used to cast a spell. Unfortunately, each time spell must be randomly determined and there's no known method to predict the spell which is being cast. Roll 1d6 to determine the effect:


Yeti Staff can be recharged by putting it into solid block of ice. During each week in the ice it regains 1d3 charges.
by Albert R. at 3:47 PM

Email ThisBlogThis!Share to TwitterShare to FacebookShare to Pinterest
Labels: A to Z, artifacts, items, random tables